There were 165 new investment projects announced during the first four months of the year in Poland, which is 15% more than during the same period of the previous year. It ranks Poland as the most FDI resilient country to Covid-19 according to the fDi Intelligence Magazine, a division of the Financial Times. 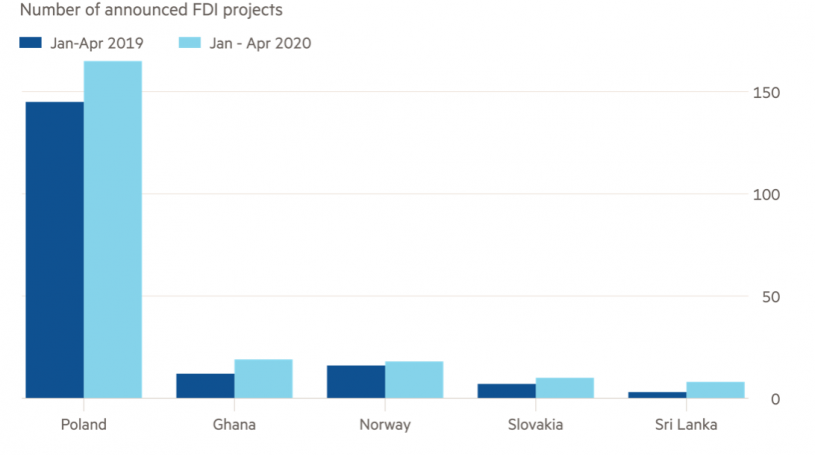 Poland leads a handful of countries that managed to increase FDI inflows during the first four months of the year against a backdrop of plummeting global investment activity because of the Covid-19 crisis.

Foreign investors announced 165 projects in Poland during the first four months of the year, up from 145 projects during the same period in 2019, according to FT-owned foreign investment monitor fDi Markets.

Poland bucked a trend that saw global FDI drop because of uncertainty caused by the pandemic and the enforcement of lockdowns curtailing business activity.

Announced FDI projects around the world plummeted 45% during the period, with leading FDI recipients such as the UK (-61%), Germany (-60%) and China (-62.7%) all suffering heavy losses.

Among the few countries that saw FDI rise during the crisis was Ghana, which saw foreign investors announce 19 new projects during the January to April period, compared with 12 projects a year earlier, fDi Markets figures show.

In Europe, Norway and Slovakia also saw FDI increase during the period.

In Asia, Sri Lanka tripled the number of projects announced by foreign investors, although this compares with a weak first four months of the year in 2019, fDi Markets figures show.

Real estate projects continue to make up the bulk of FDI into Poland, but it was renewable energy investments that drove the growth compared to a year earlier.

Foreign investors announced 16 new projects in the renewables sector in the January to April period, compared to one in the same period of 2019, as green energy groups such as Danish Vesta, German Innogy SE and RWE Renewable announced wind farm projects across the country, according to fDi Markets.

In Ghana, the boom in financial services FDI across the African continent in 2019 continued in the first four months of this year as the west African country saw foreign investors announce eight new projects in the business and financial services sectors. This compares with no FDI projects recorded in either sector during the same period in 2019, fDi Markets figures show.

Sri Lanka, meanwhile, was able to sidestep the Covid-19 investment slump because of two major projects announced by Malaysia’s Axiata.

The projects are part of a total $254m investment that seeks to bolster the development of broadband services in Sri Lanka, according to the Board of Investment of Sri Lanka, the country’s investment promotion agency.