NAWROCKI furniture company from Brzeźnica in the Bochnia commune in Małopolska Region in Poland, submitted by the Marshal's Office of the Małopolska Region, became the laureate of the 19th edition of the Economic Award of the President of the Republic of Poland, in the "SME Leader" category. 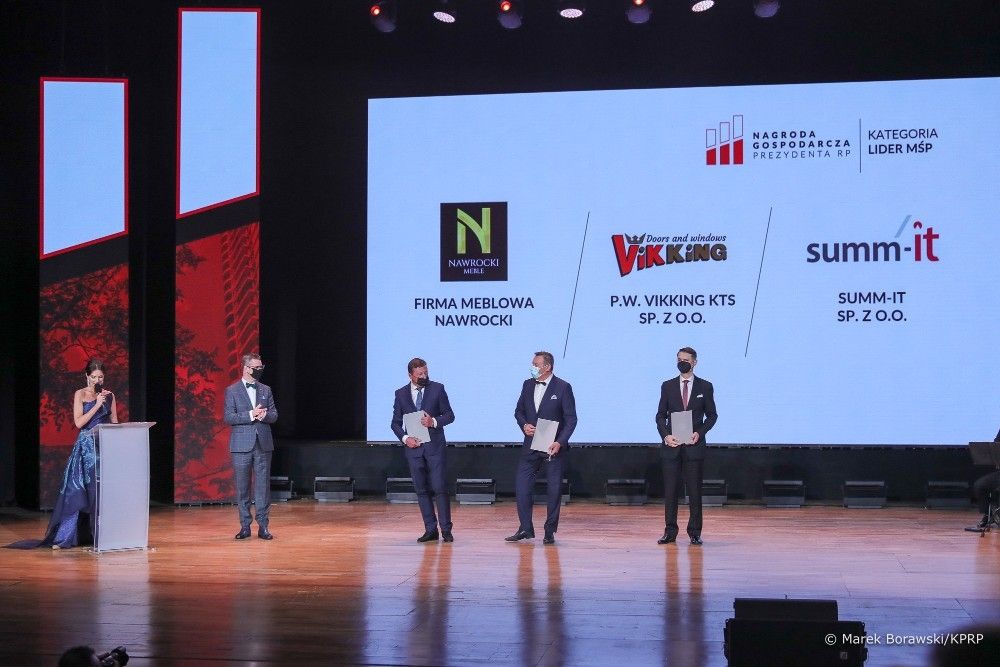 On November 4th in Podkarpackie Philharmonic in Rzeszów, during the second part of the 590 Congress, Gala of the 19th edition of Economic Awards of the President of the Republic of Poland took place.

During the ceremony President of the Republic of Poland, Andrzej Duda, gave awards to companies that contribute to the development of national economy, observe the principles of responsible business, promote the positive image of Poland and are a model for other companies, as well as the award for the research team that implemented product and technological innovation. The awards were presented in five main categories and two special categories.

The Economic Award of the President of the Republic of Poland is granted by the Head of State once a year. It is a valuable and prestigious award for Polish companies and research institutes.

- The Economic Award is very important in the context of promoting Polish business and the initiatives within the Tri-City - said Andrzej Duda in Rzeszów and emphasized that the final choice is determined by details. - All finalists are great companies - emphasized the President.

The winners of the 19th edition of the Economic Award of the President of the Republic of Poland:

The NAWROCKI Furniture Company with its seat in Brzeźnica, Bochnia Commune, is a valued family business, with over 30 years of experience. NAWROCKI has been Poland's ambassador in the international arena since 2003. Its portfolio includes the largest and most prestigious hotel projects in Poland, France and other European countries. The flagship product of the NAWROCKI company is custom-made hotel furniture based on an individual design. The company cooperates with the best architectural offices from France, Italy and Great Britain. Nawrocki Company works directly with the customer as a Polish company and not as a subcontractor of the French company. It employs over 100 full-time employees.

A very good example of NAWROCKI's success is its participation in 2019 in the renovation of the luxury 5* Intercontinental Grand Hotel Dieu in Lyon (France). NAWROCKI made all the common parts of this hotel as well as the mobile and floor elements and decorative panels for all 144 rooms. The hotel was named best luxury hotel at a gala in New York, and the "Grand Dome" bar, made by Nawrocki's company, received an award at a gala in Paris. The work carried out by Nawrocki was part of the overall renovation of the hotel, which proved to be the largest renovation in Europe between 2015 and 2019 and in French history in general.

Sergiusz Martyniuk, Chairman of the Board of Pronar Owners

Prof. Adam Glapiński, President of the National Bank of Poland


Source: Office of the President of the Republic of Poland